Uncovering the Best Castles in Ireland

The Emerald Isle. A land of 40 shades of green, rugged scenery, leprechauns, and castles. Look at a map of castles in Ireland and they are dotted around the country from north to south and east to west. Either connected to the ancient kings and ruling classes of Ireland or rich English landowners before Ireland gained independence, the castles in Ireland are spectacular in their range of architectural styles.

15 of the Best Castles in Ireland

One of the most picturesque hotel castles in Ireland, Ballynahinch Castle benefits from the stunning setting of the 12 Bens Mountain Range. The castle is a former fishing lodge and still attracts fishermen as guests today. Sitting in 700 acres of beautiful countryside, the castle hotel features wood panelling, traditional cosy parlours with open log fires, and riverside rooms, alongside the salmon lake.

Have a thing for fairytale castles? You will love this post!

Some castles in Ireland are private homes and cannot be visited. Kilcoe Castle is owned by Oscar winning actor Jeremy Irons who discovered his Irish heritage on The TV show “Who Do You Think You Are?”. Sitting on a bay in Roaringwater Bay the original castle was built around 1450 by the MacCarthy clan. It was connected by a causeway to the mainland in 1978, and the ruined castle was bought by Irons in 1998 and £1 million was spent on its restoration.

Open: Not open to the public

Sitting atop a crop of limestone in the Golden Vale, the Rock of Cashel is a step back into Medieval and Celtic history and one of the most important historical attractions of Ireland.

A collection of buildings rather than a castle including a huge round tower, Cormac’s Chapel, and the Cathedral served as the seat of the Kings of Munster prior to the Norman Conquests. All the buildings are enclosed by a perimeter wall.

Open: Every day except 24th to 26th December.

Average length of time to tour the castle: 1.5 hours.

Useful information: No shops or cafes on site.

Built during the first decade of the 13th century, Kilkenny towers over Kilkenny High Town. The former seat of the powerful Butler family for 600+ years guards the River Nore.

One of the largest castles in Ireland, it is extremely well preserved and stands in meticulously manicured grounds, with a rolling green lawn at the forefront.

Open: General access every day February through October. Prebooked guided tours only between November and January.

Average length of time to tour the castle: 1.5 hours

Originally built in the 15th century by the O’Donnell chieftains before being burned down and rebuilt in the 17th century, the Jacobean-style Donegal Castle sits on the pretty shores of the River Eske.

It is one of the most impressive looking castles in Ireland thanks to its distinctive and unique tower. Beautifully preserved, the castle contains many pieces of fine art, antiques, Persian rugs, and French tapestries. The castle is the central attraction of Donegal, one of the most beautiful towns in Ireland.

Average length of time to tour the castle:   1 hour

Built as a castle in 1868 and becoming a Benedictine Abbey in 1920, Gothic Kylemore Abbey is one of the most visited attractions in Ireland. Nuns still live on the estate which stands in stunning grounds that include a 6-acre Victorian walled garden complete with a mountain stream and a lake known as the “Place of the Horse” thanks to a local legend of a white horse appearing in the lake every seven years. Places of interest are the church, the mausoleum, restored glasshouses, and plenty of nature trails and walks.

Average length of time to tour the castle: 1 -2 hours

Useful information:  Guided garden tours of the garden in summer. Shops and cafes on site.

Providing a full-on Irish castle experience, Bunratty transports you back in time to a period folk village and its feudal castle. Partially restored, the castle is the centre of an interactive village and also hosts medieval dinners in its banqueting hall.

Bunratty Castle was originally built in 1425 and restored in 1954. It boasts probably the finest collection of medieval furniture in Ireland.

One of the haunted castles in Ireland, Castle Leslie is also a luxury hotel and spa sitting in an estate of 1,000 acres. Owned by the Leslie family since 1665, the Scottish-baronial style castle is haunted by Norman Leslie, a soldier who died in the First World War. The room he haunts –  the Red Room – is one of the main attractions of the hotel. Castle Leslie hosted the wedding of Paul McCartney and Heather Mills in 2002.

This is the largest Anglo-Norman castle in Ireland. Sitting on the banks of the River Boyne, construction began in 1172 and it took 30 years to build a central 3-storey keep with surrounding curtain walls. Extensive additions were made in each century from the 13th to 19th including further fortifications and banqueting spaces.

Average length of time to tour the castle:  1-2 hours

Typical of an Irish chieftain’s stronghold in the Middle Ages, Ross Castle enjoys a majestic position on the shores of Lough Leane in Killarney National Park and is one of the most beautiful places in Ireland.  It has many of the features expected of a defensive castle and it’s easy to imagine the fighting that went on here, particularly as it is believed to be the last stronghold to fall to Oliver Cromwell in the Irish Confederate Wars.

During the summer, boat trips to the island of Inisfallen with its 7th century monastery are available from the castle.

Average length of time to tour the castle:  1-1.5 hours

Dunlunce has become one of the most recognisable of castles in Ireland thanks to the TV show “Game of Thrones”. The ruined castle sits atop rugged granite cliffs and is connected to the mainland by a bridge.

The dramatic setting of this castle is as dramatic as its history which includes a period of bloody, violent rebellion under the famous and ambitious warrior chieftain Sorely Boy MacDonnell.

Average length of time to tour the castle:  1 hour

What is known today as Belfast Castle is not the original. The first Belfast Castle was burned down in 1708 when it was the home of the 1st Baron Chichester. The replacement castle was built between 1811 and 1870 on the slopes of Cave Hill County Park, 120 metres above sea level. Now owned by the Belfast government, the turreted baronial-style castle cost £2 million to be refurbished to be opened to the public.

Average length of time to tour the castle:  1 -2 hours

Occupying a strategic position on the banks of the River Liffey in the Irish capital, Dublin Castle includes part of the original 13th century structure but the building mainly dates to the 18th century.

The castle has always been the seat of the ruler of Ireland and until 1922 it was mainly in the realm of King or Queen of England. Today, one of the most important castles in Ireland, Dublin Castle houses government departments including the state apartments. These are open to the public along with the Medieval Undercroft and Chapel Royal.

Average length of time to tour the castle:  1 hour

Blarney Castle is not so much known as being one of the great castles in Ireland but for the legendary Blarney Stone. Can anyone really visit Ireland without kissing the Stone of Eloquence? Many myths purport to the origin of the stone, but whatever it was, for 200 years people have been kissing the stone to gain the “gift of the gab”.

Blarney Castle had been standing for 400+ years when it became home to the famous stone and today it is a fascinating storied landmark standing in beautiful gardens.

Open: Every day except Christmas Eve and Christmas Day.

Average length of time to tour the castle: 1 hour

Of all the haunted castles in Ireland, Leap Castle is said to be the most haunted. The haunting is said to be the spirits of the many souls that were brutally tortured and killed by the violent O’Carroll clan, the builders of the castle. Today the castle is home to the Ryan family and is not open to the public, however, it is still one of the most popular Irish castles due to its notoriety.

As you can see, the castles in Ireland are fascinating and a chronicle of the history of this stunning and welcoming country. Have you a favourite castle in Ireland? What have we missed on our list? 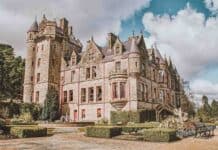 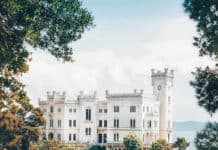 10 Best Castles in Europe to Add to Your Bucket List

ABOUT US
From spending 4 years bedridden to traveling the world. Helping you discover the world!
FOLLOW US
© avenlylanetravel 2022. All rights reserved.
28.0K shares