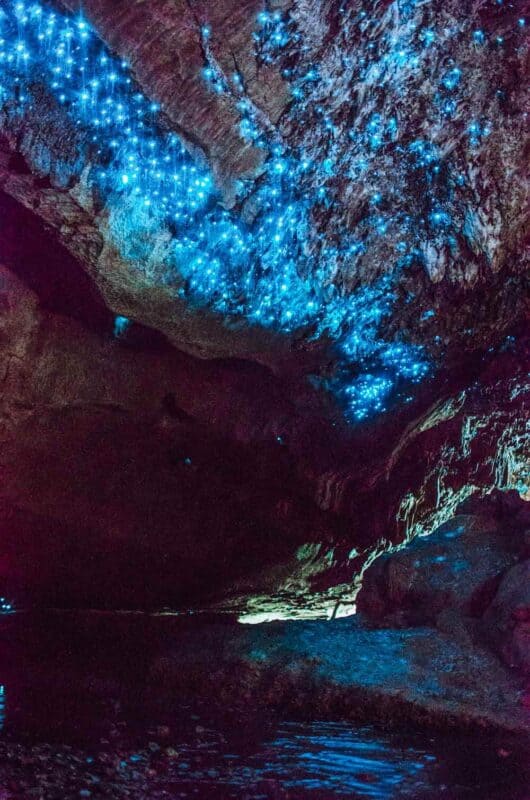 The Waitomo Glowworm Caves are an absolute must see on any trip to New Zealand. They are the best Glow Worm caves in New Zealand. I can honestly say that I have never had another experience even come close to what this tour was like!

Seriously, nothing compares to descending through caves into and underground river and boat ride lit up by cool blue glowworm light.

What to expect on a Glowworm Cave Tour in New Zealand

There are so many elements of this tour that make it worth seeing, but the fact that they can all be crammed into one day is truly amazing.

Once you arrive you make your way through the lush forest to a big cave. You climb down into the caves and almost immediately get to see breathtaking caverns featuring beautiful formations (and stalactites that I was convinced were going to fall down and crush my head).

After a quick trek, you arrive at an underground river where you can go even deeper into the caves. The boat tour is unreal as you led from pitch black caverns into rooms that are lighted by thousands of glowworms.

The cool blue light of the glowworms is eerie and intoxicating all at the same time.

My head was swimming as I was trying to figure out if I really was in an underground cave, or if I was swirling through a star-system in outer space.

Quick Facts about the Waitomo Caves

The 3 Most Popular Waitomo Cave Tours

There are a number of different Waitomo Cave tours available. Tours are available year round and are always led by a local Maori tour guide. The guides are hilarious and obviously well-informed on everything about the caves.

We did one of the quick and cheaper options, but feel like we could have loved one of the longer and even more immersive ones.

Here are the Waitomo Glowworm Cave tours with the highest ratings:

Waitomo Glowworm Caves 45-Minute Guided Boat Tour – This is the most popular option and the tour that we took. We loved it! This one included the hike and tour of the upper caves as well as the quick boat ride through the underground river.

Waitomo Caves Black Labyrinth Black Water Rafting Experience – On this tour you will float down the underground river in rubber tubes while admiring the amazing glowworm displays above. After your tour they include a hot shower to clean off and warm up as well as complimentary snacks. You will have access to their equipment, which includes the tubes, wetsuits, boots and a helmet. Participants must be at least 12 years old or weigh at least 45 kilograms (99 lbs).

Waitomo Caves Black Abyss Ultimate Caving Experience – A 3 hour rafting tour that involves getting into a full wet suit. The guides are amazing and everyone loved the tour.

Can you take photos in Waitomo Caves?

At most of the tour locations they do sell photos of the Glowworm Caves. I know it isn’t the same as taking your own, but this option is available if you want it.

Are Waitomo Caves worth it?

How much does it cost to go to Waitomo Caves?

Pricing will vary depending on which tour. But you can expect to spend anywhere from $40 to over $100 USD. Check current pricing for The Waitomo Caves here.

Where to stay in New Zealand:

We ended up staying about an hour away from the caves in Hamilton and drove down in the morning.  We stayed at the Quantum Lodge Motor Inn.  It was perfect for what we needed and was under $100 a night.

You can check prices or book here.

Read Next: 20 Incredible Landscapes You Can Only Find In New Zealand 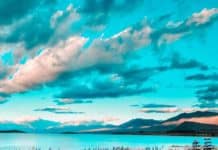 The 20 Best Places to Visit in New Zealand

ABOUT US
From spending 4 years bedridden to traveling the world. Helping you discover the world!
FOLLOW US
© avenlylanetravel 2022. All rights reserved.
228.0K shares