The city of Belfast is the largest in Northern Ireland. Not as widely known as Dublin this town has so much to offer to tourists. Sure the area has had a turbulent past and while you’re able to explore all of its history the area has come a long way in building a lively and fun atmosphere for locals and visitors alike.

Come check out the top 10 things to do in Belfast!

Friday trading at St. George’s Market have been taking place since 1604, wow! Come see the almost 250 stalls selling everything from clothes, produce, books, and antiques. Don’t miss the 23 “fishmongers”. Come Saturday you’ll find live music, coffee, tapas, cheese, crepes, and Irish cuisine. Sunday has a mix of both days. Who wouldn’t find this one of best things to do in Belfast, Ireland?

2. Explore one of the best best things to do in Belfast the Belfast Castle in Northern Ireland

Built by the Normans in the 12th century – it was situated in the middle of the town. It was owned by the Chichester family in the 1700s. Sadly the original structure was lost in a fire so the family decided to rebuild in the outer neighborhoods of Belfast in the 1800s. Discover one of the most interesting best things to do in Belfast and visit the Belfast Castle.

3. Immerse yourself in history at St. Anne’s Cathedral

St Anne’s Cathedral is one of the most beautiful places in Northern Ireland. The ceiling mosaics and Celtic sculpture will take your breath away. If that’s not enough affix your gaze on the stained glass word, tapestries, and detailed floors. Historians and civilians (haha) alike, will be in heaven in Sir Thomas Drew’s masterpiece.

4. You have to take try one of the top things to do in Belfast and take a ride with a Black Cab Tour.

This has to be one of the most fun things to do in Northern Ireland for couples. No planning, just an hour and a half (or so) of sightseeing by your own black cab driver. You never know who your tour guide will be, which is half the fun. Don’t worry, all guides are seasoned professionals, the best part is listening to their personal experiences as they describe the history of the city. They’ll take you through some of the top attractions the area has – like those on this list!

5. Explore Giant’s Causeway Tour to and from Dublin and Belfast.

You feel like you’re on another planet while walking the paths of these supersized, natural stepstones. With over 40,000 rock columns created from ancient volcanic stretching amongst the coast – the Giant’s Causeway Tour absolutely cannot be missed. It’s easily one of the best places to visit in Northern Ireland with good reason.

6. See the memorials at the Belfast City Hall.

If you’re looking for more history try Belfast’s City Hall, one of the most memorable things to do in Ireland. Take a tour of this Renaissance building adorned with Celtic myths and legends, such as the Cattle Raid of Cooley. You’ll find them within the stained glass windows of this beautiful Renaissance building.

You can also find memorial to all of the over 1500 people who passed away on the Titanic, soldiers who fought in WWI and WWII, and the victims of the Great Famine.

7. Stroll around the Botanic Gardens- one of the top things to do in Northern Ireland.

Go lose yourself in the Palm House or Tropical Ravine. You’ll find some of the oldest seed plants in existence, see roses, banana, cinnamon, or a variety of tropical vegetation. Located near Queen’s University, the gardens are considered the areas best open spaces. The Botanic Gardens is also a beautiful location to take in concerts and festivals.

8. See where the infamous Titanic was created in Belfast!

You all know the story now come see it’s start. It’s one of the most riveting North Ireland attractions. The Titanic’s influence on the surrounding city is obvious. Step inside the interactive heritage displays, explore the sea, and even find the wreck itself. They even have recreations of the cabins and grand staircase where you participate with afternoon tea.

9. Take in a concert at one of the Belfast top attractions – Crumlin Road Gaol!

Said to be one of the most haunted locations in all of Belfast, Crumlin Road Gaol is rated as one of the areas top attractions. The prison closed in 1996 and has become the famed place to visit. Guests can grab a bite to eat at the bar, take an alarmingly scary paranormal tour, even catch a concert.

10. Go to Kingspan Stadium and see an Ulster Rugby match.

A rugby game in Ireland? Why not! Take in a match of Belfast’s most famous rugby team at their new stadium. Without a doubt one of the best things to do in Northern Ireland. Go cheer on the local Ulster Branch!

So where are you heading to first?! Let me know! 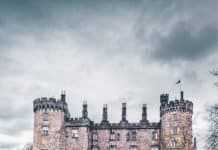 Uncovering the Best Castles in Ireland (Including Hotel Castles)