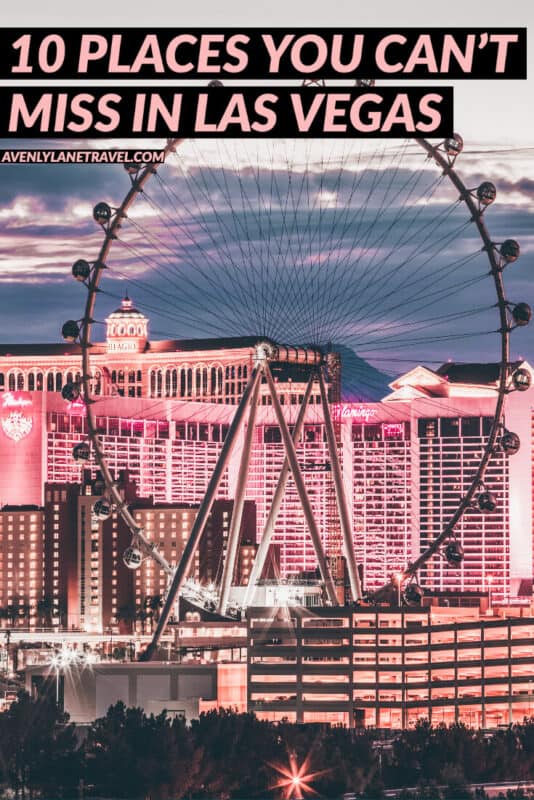 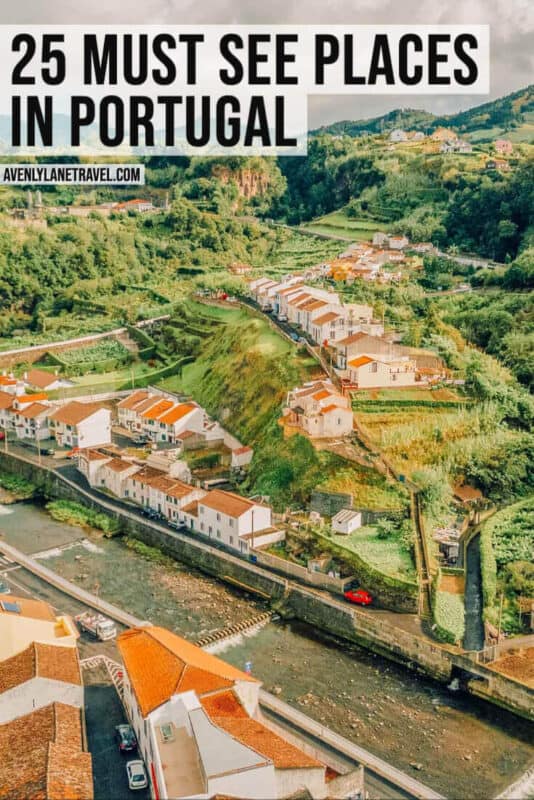 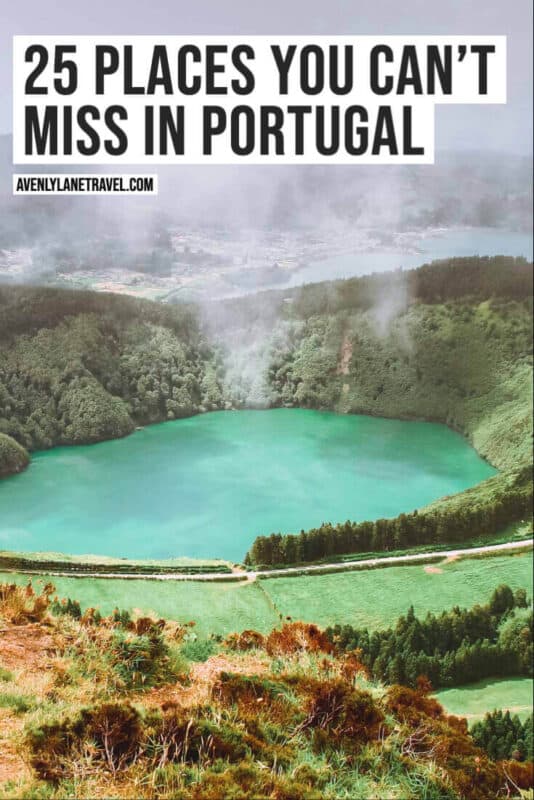 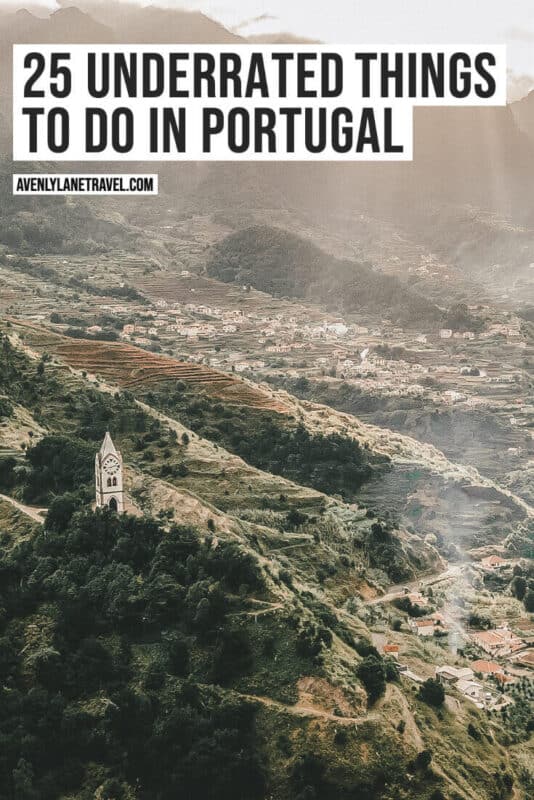 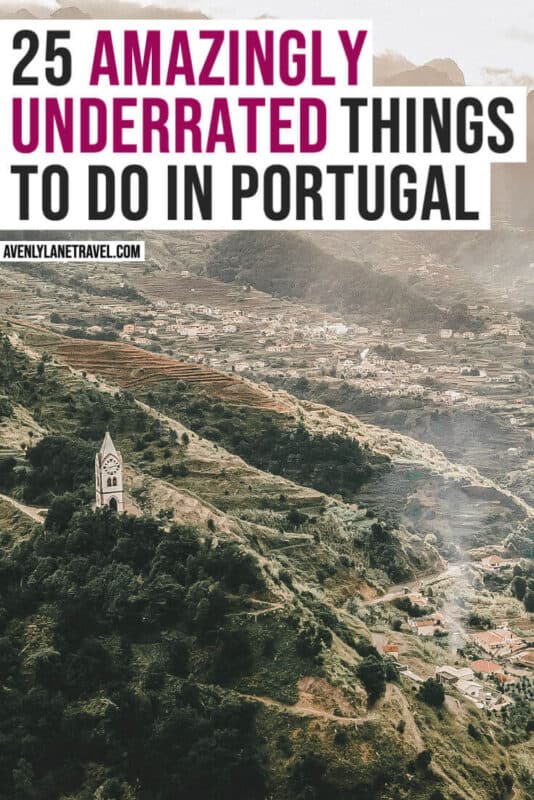 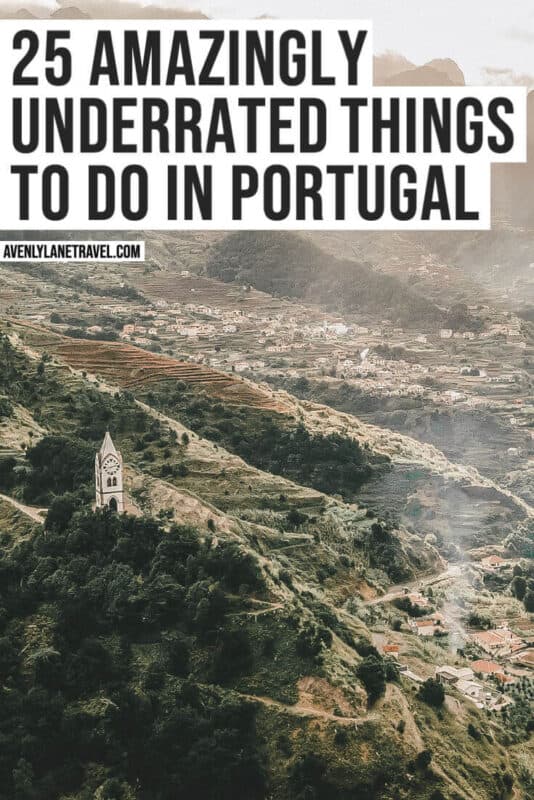 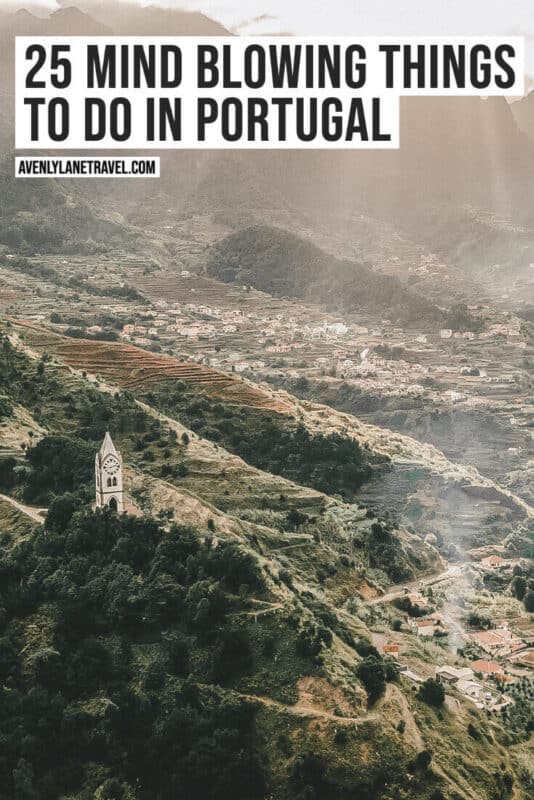 Looking for the best things to do in Portugal?

Most visitors to Portugal will make a bee line for the beaches of the Algarve, Lisbon, Porto, or the Douro wine region. But there is far, far more to see and do in this amazing country.

I had the chance to visit Portugal for the first time last year and it blew me away! From the charming European town of Porto, to the stunning castles in Sintra, Lisbon, and one of the best things to do in Portugal – visit the Azores Islands!

One of the gems of the Portuguese island of Madeira, Sao Vicente is an historic settlement that was likely settled during the middle of the 15th Century.

This is a great place to explore the more natural and less touristy part of the island. Visit the volcanic caves to learn more about how the island was formed, and see stalactites and stalagmites. And consider taking the easy hike to Levada Fajã do Rodrigues to see short, dark tunnels and a waterfall.

Things to do in Sintra

Fairy palace in Sintra, Portugal. One of the most beautiful castles in the world!

Sintra Palace is the most impressive medieval royal residence in the country and the only remaining palace from the Middle Ages.

Located at the heart of the old town centre, the palace was also built by the moors and is distinguished by unique and colourful architecture.

Castle of the Moors

Built in the 8th century by the Moors, this ruinous castle is a National Monument and one of the most iconic landmarks on the Sintra landscape.

Municipal museum of Palace of Monserrate in Sintra

This place might not be the highlight of a Sintra day trip, but it is a really beautiful stop if you are close by.

Did you know there is a village literally built on a rock in Portugal? Definitely one of the most unique towns you might ever see. Have you been?

This amazing mountain village is defined by its landscape. Houses here are built into and around huge rocky boulders and into carved out caves in the rocks themselves. Unlike so many other places, which have been touched in many ways by time, this village has changed little in hundreds of years, and so it a kind of living museum.

Alfama is a neighbourhood not to be missed. It is a delightful labyrinth of narrow, cobbled streets and old buildings that leads up the steep slope from the Tejo estuary to the Castelo de São Jorge. Many of the city’s most impressive historic buildings are found here. But over the years, dilapidation set in. The area became known for being rather run down and rough. Today, however, it has shrugged off that rather grim image and become a fashionable and artisan district, with plenty of character and charm.

Check out the stunning stretch of coastline on a hike between Carvoeiro and Marinha – one of the great hikes Portugal has to offer. The Algarve is not all about beaches and busy resorts. And there are plenty of quiet places to enjoy outdoors adventure.

Carvoeiro is quieter and more peaceful than many other beaches and resort towns in the region, and there are plenty of great coastal walks to enjoy nearby, as well as a range of other attractions.

While the small fishing village of Benagil has gained fame in recent years due to its incredible sea cave with a hole in its ceiling, taking a tour along this stretch of coastline does not need to mean waiting in queues on Benagil beach.

Choose boat tours from other local beaches, and you will not only be able to visit this famous cave but also other less well known caves along this stretch of coastline.

Be sure also to check out small coves such as Carvalho and Praia da Marinha close by.

This beach is another true gem of the Algarve. While it may be a stretch to call this beautiful beach underrated, since it is hugely crowded in the summer months, do not let the crowds and the small size of this strand put you off.

There may not be much space to spread out, but get here early and you will be rewarded by a truly stunning location. This is a perfect, sheltered spot for swimming and snorkelling, and the fabulous rock formations that cradle the soft sand strand are well worth the trek down to the beach on the stairs.

There are many beautiful beaches in the Algarve that are very well known. But it makes sense to go to places less crowded, and to explore some more underrated locales in the region. For example, Altura is found right on the Spanish border, far from the more built up stretches of the Algarve coastline. It is a family-friendly beach which is laid-back and not too crowded. It offers a range of exciting watersports in summer.

This bridge is another underrated attraction of Madeira. It is a basalt arch that links Ponta do Sol pier to the shore. It was built between 1848 and 1850 and though it might be easily overlooked, is a unique feature well worth appreciating.

What to see in the Azores Islands – Portugese Islands

Read more on the AZORES below:

Tip: Be careful when swimming in the orange pool as it stains everything it touches, including your swimsuit! I learned this the hard way.

Sete Cidades is a small village on the western side of San Miguel Azores, but the name is more commonly used to refer to the three-mile (five km) wide series of volcanic crater lakes in the area, surrounded by some absolutely amazing hikes and lookout points.

The two calderas, or filled-in lakes, are often said to be different colors due to the vegetation and algae in the water – one gray and one green – but they looked the same when we were there.

Miradouro Boca do Inferno may mean ‘the mouth of hell,’ but the viewpoint is anything but – it’s one of the highlights of our trip top the Azores perfect for all types of travelers. It’s the most famous viewpoint on the island, looking down from the top of the mountain to the twin lakes below.

It’s a short five-minute hike up a few steps to the famous viewpoint, but if you want more of a challenging hike, there are longer trails around the lakes.

Momteiros is a small town on the western side of the Sao Miguel island and is definitely worth a visit. We were already in the area at the Termas da Ferraria natural spa and went up to Mosteiros on a whim – it would have been a huge mistake to skip it.

The gorgeous little black sand beach is easily one of the most beautiful Azores beaches.

Things to do in Porto, Portugal

Porto is known for decorating the outside of buildings with tiles. You see tons of it, everywhere. Some of the best tile mosaics are hand painted on the sides of churches.

One of the most amazing examples is on the side of the Chapel of Souls, also known as Capelas das Almas. The mosaic expertly portrays the drama of the life and death of saints.

The Portuguese city of Porto has so many attractions that you might easily overlook this engineering marvel. The Dom Luis Bridge is a a large double-deck metal arch bridge that spans the River Douro between Porto and its neighbour Vila Nova de Gaia.

When constructed, it was the longest of its type anywhere in the world. Designed by Theophile Seyrig, it was built between 1881 and 1886. Pedestrian walkways along the sides of the structure provide some amazing views over the river and the city.

Finally, it is worthwhile mentioning that there are plenty of historic cities in mainland Portugal that are far less visited, and which are underrated when you consider all that they have to offer. One example is the town of Tomar, where you can explore a rich history associated with the Knights Templar.

What do you think of our list of just a few of the underrated things to do in Portugal? Of course, there are plenty more. Caminho, Viana do Castelo, Viseu’s street art, Coimbra (beyond the famous University, Leiria, Arrábida Natural Park, Santiago do Cacém, Mertola… and a great many other amazing destinations and all also not given the time and attention they deserve.

Parque Terra Nostra (Furnas, Azores) All you Need to Know

ABOUT US
From spending 4 years bedridden to traveling the world. Helping you discover the world!
FOLLOW US
© avenlylanetravel 2020. All rights reserved.
3.3K shares