Once there, you have to make the trek to the remote village of Sete Cidades. – one of the Azores’ main attractions! The area around this village is home to epic hikes, volcanic hot springs, curiously fantastic beaches, and two neighboring lakes of different colors (Lagoa Verde and Lagoa Azul) – one green, and one blue!

Towering 823 feet (251 meters) high, this one is especially famous for being close to the abandoned Monte Palace Hotel Azores. Many people enjoy walking around the eerie and abandoned hotel and getting some dramatic photos from the rooftop. Supposedly they’ve recently decided to rebuild it though.

You’ll get some amazing views of the lakes as well as the rolling hills and Atlantic coastline from the viewpoint on Pico da Cruz hill.  Stop along the way to enjoy canoeing or biking (rentals are available) or carry on to the small town of Sete Cidades.

When you’re in Sete Cidades, you’ll also be close to my favorite beach in all of the Azores – Mosteiros Beach. This famous black sand beach is spectacular to witness and has some beautiful natural rock pools to swim in. Don’t miss the view of the sun setting between the dramatic rock formations!

When you think about the distance, it’s not really that far. But while there are a few buses running between Sete Cidades and Ponta Delgada they are known for not being super reliable. So, renting a car is the way to go – and it’s pretty affordable too! It will only take you around 30 to 40 minutes to drive to Sete Cidades from Ponta Delgada. Another option is to book an Azores tour that will take you around Sete Cidades.

25 Underrated Things to do in Portugal

The Best of the Azores Beaches: Mosteiros Black Sand Beach 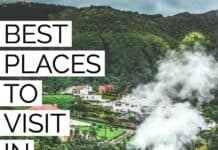 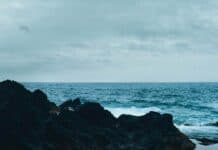