Cala Santanyi: A Gorgeous Beach That is More Confusing Than It Should Be

There are so many beautiful calas or cove beaches on the island of Mallorca that you can miss some hidden gems if you aren’t paying attention. We almost missed Cala Santanyi because of the Mallorca naming conventions.

I got really confused trying to figure out where this gorgeous beach actually was. I’ve seen 5 different beaches all get called Cala Santanyi.

Technically, each of the 5 beaches could be correct, but they weren’t the one I was actually looking for. Let me explain.

To further confuse things there is also a resort named Cala Santanyi overlooking this beach, but if you get there you are definitely in the right spot!

As previously mentioned, this beach is in the Santanyi region of Mallorca on the southeastern coast of Mallorca.

It is about 40 miles from Palma where the main airport is, or about a one hour drive across the island.

Next door is another mini town named Cala Figuera that is also in the Santanyi district.

Cala Figuera is a small fishing village that doesn’t have its own beach, so the visitors from there will head to the closest beach, which is Cala Santanyi.

While Cala Figuera doesn’t have its own beach or swimming spots, it is known for its traditional buildings and still being a fishing village.

What To Expect At Cala Santanyi

By Mallorca cove beach standards, this beach is “big.” At least it is bigger than others and offers a few perks that a lot of others don’t.

Full disclosure, this beach tends to attract a lot of people! Supposedly the crowds are due to it being next to a number of resorts as well as on a main public transportation route. The wide white sand is gorgeous, but you may have to fight for space to spread your towel out on it.

Even though this beach gets crowded parking is relatively easy. With it being in the middle of a small urban area, there is plenty of street parking all around the beach. One of the best parts of the parking is that it is free. Even if you can’t find a spot directly next to the beach, the walks from the next street over isn’t bad.

No Cost, But Umbrella Rentals Available

Cala Santanyi is free to access, but if you do want to rent an umbrella you can.

Steps To The Beach

The steps down to the beach are pretty steep, but thankfully there is no real hike required like a lot of other Mallorca beaches require.

The caves that jut into the cliff walls are perfect for snorkeling. The clear water is home to lots of marine life that you don’t have to be a professional diver to see.

Restaurants and Bars In The Area

Unlike a number of other beaches this one has restaurants and bars in the area. This allows you to enjoy a whole day without having to get back in your car.

This cove has a straight shot out to open waters which make the waves come in a little bit more than some of the others. The waves are generally still very mild, but a little bit bigger than a lot of the other more protected coves.

This is a great beach for those that are in the area. While you may have to fight for some space to spread out on, you won’t be disappointed with the beach and facilities itself! 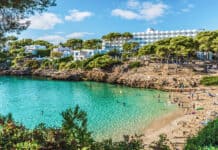 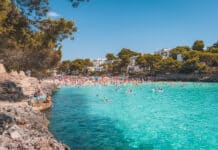 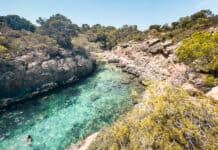 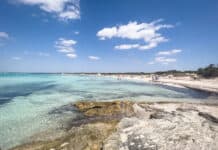 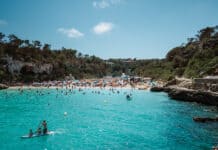 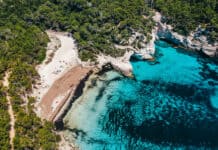 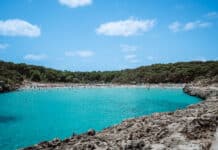 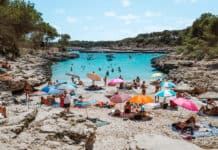 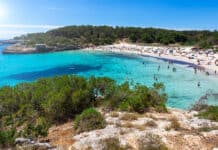