Hanauma Bay is one of the most famous snorkeling spots on earth. Hanauma Bay snorkeling earns this reputation for good reason. The natural bay is home to tons of coral reefs, a dizzying array of aquatic sealife, and is one of the easiest places to learn to snorkel in. Virtually anyone can snorkel and thoroughly enjoy the experience.

2022 UPDATE! THERE ARE A TON OF NEW PROCEDURES REQUIRED TO BE ABLE TO VISIT. MAKE SURE TO READ BELOW FOR UPDATES TO MAKE SURE YOU ARE UP TO DATE.

The bay formed in the crater of an extinct volcano. It got filled in with water and tons of marine life. The unique shape of the bay prevents rougher waters from disturbing the area and aquatic life.

I’m a terrible swimmer and get anxious when underwater, but I still felt totally comfortable since the water was calm, it wasn’t too deep, and there were tons of reef and amazing sea creatures directly in front of me! I also loved that I didn’t have to go far from the shore to be able to access the reefs.

In Hawaiian “hana” translates to bay and “uma” translates to curved. Therefore, the idiot non-Hawaiian speakers like myself in effect call this area the Bay Curved Bay. How is that for being redundant?

In 1967 the bay was set apart as a protected area. Visitors have been flocking to it to enjoy the wildlife and scenery ever since. Prior to 2020, the bay welcomed about 3,000 visitors per day. The bay isn’t that big, so you can imagine that it would get crowded.

Not only was the bay crowded, but the resultant effect was that the tourists were often destructive to the protected area. This is one of the few places on earth that COVID was actually good for as it shut down and gave the reefs a chance to recover.

To help maintain the reef in its current state, authorities decided to limit the total number of daily visitors to 720 and even close the bay on Mondays and Tuesdays.

For non-residents, you can only enter Hanauma Bay with a reservation. Getting one is actually a rather difficult task that requires some careful planning. Let me explain.

You can read more and book your Hanauma Bay snorkeling reservations here.

There are no more Hanauma Bay tours allowed. Previously there were tours that would take you to the park and help you explore. Now, the only “tour” allowed and worth booking is one that will provide transportation to and from the bay.

Given that transportation and parking can be difficult (I waiting in line to enter the preserve for 25 minutes and almost missed my entry time slot) you might want to consider booking a Hanauma Bay Transportation.

If you can get the earliest time slot on a Wednesday morning you will find the reefs at the absolute best condition. This is because the park will have been closed and undisturbed for the previous two days.

Realistically though, given the capacity and time constraints, the best time to go to Hanauma Bay is any time that you can actually get in.

NEW: What To Expect Once You Actually Get In

When I showed up there was a 20 minute line to even get into the parking lot. Given the capacity restrictions it is now much easier to get a parking spot, though I still hear that it can fill up at times forcing people to park nearby and hike in.

When I finally got into the preserve they grouped us by time slot, and then asked us to check in together. The process was efficient and didn’t leave us waiting for long.

Once our tickets were checked, they require you to watch a 10 minute safety video. Basically, the video says don’t ruin the reefs for others by touching the coral, touching the animal life, or poisoning the water with non-reef safe sunscreen.

After you finish the video you need to make the trek down to the beach. It is a pretty steep hill that will take you about 5 minutes to get down. If you aren’t up for the hike there is the Hanauma Bay Shuttle or tram that drives back and forth. If you aren’t feeling up to the hike the tram ride is free.

If you don’t have your own snorkel gear you can rent it on the beach. It costs about $20 per set which isn’t exorbitant, rather than pay the Hanauma Bay snorkel rental rates you can purchase your own for about the same cost from a local store.

There are also locker rentals if you don’t want to leave your valuables such as your phone and keys on the beach.

Oh, and one of the best Hanauma Bay snorkeling tips I have to offer is to make sure you try your mask on ahead of time! I went to get in and saw that my original one didn’t fit at all!

The Hanauma Bay water temperature average in the winter is 77 degrees F. It stays around this temperature through spring and rises during the summer to an average of 78.8 degrees F peaking in the fall at 80.6 degrees F.

Conclusion: It is Worth It!

Getting into Hanauma Bay is now quite a process. Given the difficulties you may wonder if it is worth it. I loved the experience and the simplicity with which you can observe the reefs and sea life.

There are other amazing spots to snorkel on the island that are less crowded and free to access, but if you aren’t the best swimmer and especially if you are looking to snorkel with kids, then the Hanauma Bay snorkeling experience can’t be beat.

If you are looking for other Oahu snorkeling spots I highly recommend checking out Kahe Point/Electric Beach or Shark’s Cove. 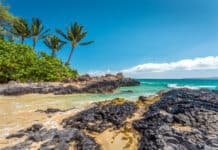 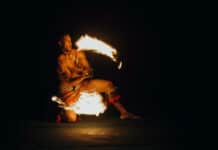 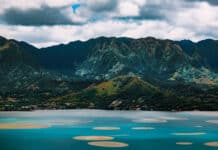 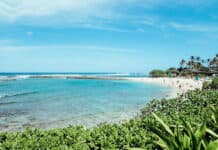 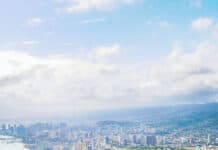 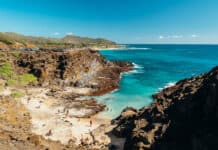 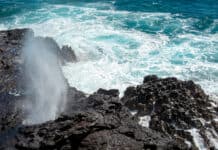 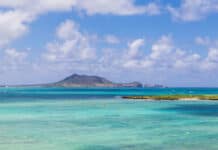 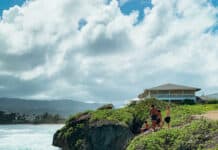